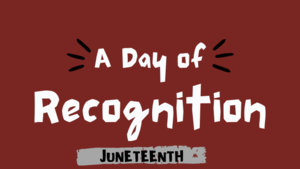 For more information on Juneteenth and its history, please see below.
President Lincoln signed the Emancipation Proclamation freeing slaves in America on January 1st, 1863. However, slaves in Texas were not told of their freedom until June 19th, 1865. On that day, Union soldiers, led by Major General Gordon Granger, arrived in Galveston, Texas with the liberating news that the Civil War had ended, and that all slaves were free. This historic date has become one of the most widely celebrated dates in Texas history; especially among African-American Texans, and is sometimes referred to as “Juneteenth Independence Day, Freedom Day or Juneteenth.” On June 3rd, 1979 spearheaded by the late State Representative, Al Edwards, the Texas State Legislature officially declared June 19th as an official legal holiday: Juneteenth. Forty-two years later, Juneteenth is now a federal holiday for the United States to celebrate freedom for all of humanity. On that historic day a whole race of people in Texas was finally a vital part of America's citizenry, free at last.
Published June 23, 2021 Print