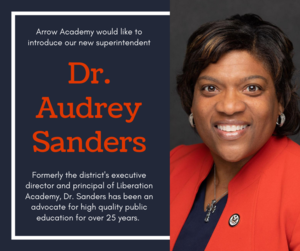 The Board of Trustees met on July 9, 2019 and voted unanimously for Sanders to be the next superintendent of schools.  She formerly served as the district’s executive director for 3 years and founding principal of Liberation Academy.

“The Board is extremely proud to select Dr. Sanders as the new superintendent,” said Arrow Academy Chairman of the Board, William Walsh. “She has been a tremendous asset to Arrow through her leadership on campuses and at the district level.”

Sanders has been an advocate for high quality public education for over 25 years. She believes that no child should be trapped by the zip code that their family lives in; but, have an opportunity for school choice that can offer a positive learning environment.  She grew up in La Porte, Texas in an impoverished neighborhood.  Her first classroom was in the family’s front yard with her two brothers as the students and the Dick and Jane series, See Spot Run as their only textbook!

Audrey has served on the Board of Directors, Member-at-Large for the National Association of Alternative Certification as well as a TEA designee for the USDE National Summit on Supplemental Educational Services and Public School Choice.  She earned her Bachelor of Arts degree from Houston Baptist University. Audrey completed her Master of Education degree and her Doctorate of Education degree from Texas Southern University. She also completed post graduate work in the Educational Diagnostician certification program from the University of Texas Rio Grande Valley.

Audrey’s joy is her family. She is married to her college sweetheart, Carlos and they have two beautiful daughters Ariana and Caitlyn.